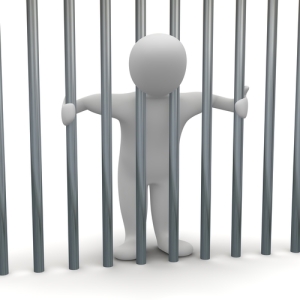 “You have a collect call from the Cass County jail.”  Not awake, not comprehending the directions being given me by some female-auto-voice, I groaned as I fumbled for a light, Which one of those little shits is in jail, and what the heck did they do?  The call was disconnected.  I dialed the most likely suspect and was sent straight to voice mail.  Next, I dialed his twin, who answered and informed me that his brother had been arrested for DUI… Super!  “Ma, the rest of us are kinda stranded.”  All known associates included my other son, “Good for you.  Enjoy, click.”  After a few more shaky attempts at following the directions of the persistent auto-female, I was finally talking to my son, who timidly wondered if we happened to have six hundred and fifty dollars.  “We couldn’t get it to you until tomorrow.”  Silence…., then, “Let me call you back, Ma.”  How many phone calls do jail-birds get now?   Whatever happened to “one phone call?”  When the next collect call came, I followed the directions successfully  and was connected immediately to my wayward child  All I got was, “Ok, call this number. They’ll arrange bail.”  I pictured my sweet boy, frightened and surrounded by the scary sort of characters I’d seen in movies and TV shows.  He’s meat.  They’ll eat him alive!  So, out the window went the promise I’d made to each of my children, “Do not ever call me from jail, because I will not be bailing any of you out!”

I dialed the number, having no idea how this worked.  “This’z Armando”… “Uh, hi, um, Armando?  I’m calling about getting my son out of jail?”  “I’m a bail bondsman. Whats your son’s name?”  I gave it to him, and timidly asked, “So, Armando, how does this work?”  “Meet me at the jail, and I’ll arrange bail.”  I was so far out of my element, This is not my life!  I had drifted peacefully off to sleep merely two hours before, seeking sweet dreams and restful sleep.   Instead, I got a living nightmare!

The Cass County jail was bustling.  Another mother, looking defeated, humiliated, and exhausted, was waiting. I got the feeling this wasn’t her first rodeo.  Next, enters over-privileged-cocky-college-kid on his cell phone laughing, there to bail out his friend.  Apparently, not his first rodeo, either.  In person, Armando was personable and informative, although scary looking as hell.  He looked to be hispanic, about six-two, two hundred sixty pounds, complete with goatee.  He was a mountain and NOT someone I wanted to come looking for me… EVER!  Oh, and then the main event walked in.  A father there to bail out his daughter, drunk off his ass, accompanied by, what I assumed was, his less than savory girlfriend.  She was sober, and clearly adoring his big ugly red/yellow drunken mess of a face!  “Baby, do you love me?” she kept repeating.  Sweetie, he’s an ugly drunk, and you’re the only one who would answer his call at this hour.  He’s head over heels for you!

After signing copious paperwork that I didn’t bother to read because I was going to sign anyway, my son was brought out with the other kid whose weary mother was waiting.  The other kid called Armando by name and shook his hand.  Omigod!   NOT their first rodeo!  As Armando is explaining the how to’s and what for’s to my kid, I am fixated on the ridiculous drunk, now passed out and snoring on a bench, and his girlfriend, unable to wake him, who keeps lifting her shirt to scratch her belly.  The entertainment value almost overshadowed the gravity of the situation.  Then I hear my son ask Armando, “what about a second offense?”  All my focus immediately riveted to my idiot child, I blurt out “REALLY???”  “Just asking, Ma.”  “Well, I can tell you about a second offense.  Do NOT call me!  Glad you’re planning ahead!  That’s.. Just.. GREAT.  Get  a bus pass and study those routes, because that is your future if there’s a next time!”  I think that, possibly in that moment, Armando was a bit intimidated by me.

So, we collected our delinquent son, and haltingly walked toward the door.  I was walking at a snails pace.  I did my best to delay our departure.  I SO wanted to stay and see how things played out with the passed out drunk, his itchy girlfriend, and his daughter.  I really wanted to get a load of the little princess.  We’ll never know, but I like to think that Drunkie Drunkerson was hauled to detox, and his princess endured a very awkward ride home with Daddy’s creepy girlfriend, whom she had probably never met before.