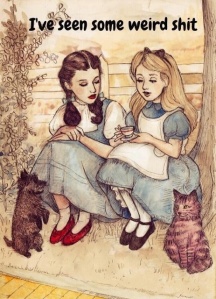 I stared at the contents of a toddler’s diaper in disbelief.  He had passed a quarter.  What on Earth?  Throughout the two years that I had an in-home daycare, I both figuratively and literally saw some “weird shit.”  The kids that I cared for ranged in age from six months old to four years old.  The diaper contents were various and sundry.  Aside from the quarter, small toys and Christmas tinsel are the standouts in my mind.  Eventually, I became immune to the shock and dismay.

“Tell Dawn that you love her, and give her a kiss, and tell her goodbye,” came from the three-year old girl in my lap as she and her single father were saying their goodbyes. Awkward!  I was sure I had the perfect words for the little cherub who sat looking expectantly from her daddy’s face to mine, “Lyle does that when he leaves because he’s my husband.”  Surely she would be satisfied with that explanation.  I had this under control.  “You should marry my daddy.”  I was out of both dignity, depth, and words.  The man, frozen to his spot, face white as a sheet, was clearly paralyzed by embarrassment.  I offered a weak, “Ok, so, um, have a good day, and… we’ll see YOU later.”  He ran his fingers through his hair, and then made a very hasty exit as he mumbled, “Later.”  Poor guy.

“OUCH! She bit me!” I looked to see who biter and victim were, and was surprised.  Not even possible.  I looked into the angelic face of the little girl who was here for her first day.  Big blue eyes blinked, void of emotion, back at me.  I was a little weirded out.  By the end of the day, most of the kids present had fallen victim and bore the telltale bite marks.  It was so odd, because there was no precursor.  She simply bit other children at whim.  When I reported to her mother that the little darling had bitten a number of other children that first day, she asked, “Were any of them babies? She’s never allowed to bite children smaller than she is.”   What are you?!  Why would she be allowed to bite ANYONE?  She went on to explain, unapologetically, that they had allowed her to bite as a form of self-defense, but that she was only allowed to bite kids who were bigger than her.  You have got to be kidding me!  I explained to her that her princess’s innocent defense mechanism wouldn’t work in this setting, as the other children were now defenseless against her biting.  She didn’t get it.  Why would she?  She was raising her child to behave like an animal!  She was also adamant that her child was never to get dirty because they dressed her in very expensive clothing.  One day, the little biter spilled grape juice on her shirt, and I, in a panic, immediately switched it out for one of my own girls’ shirts and threw it in the wash machine as if it were covered in fire ants.  When Mom arrived, the scary little princess was neatly dressed in her fresh from the wash stainless shirt.  I let her know what happened, and, rather than a relieved “Thank you,” I was attacked with her horrified, “You didn’t dry it in the dryer did you!?  We never dry her clothes in the dryer!” I was dumbfounded, “I’m sorry, but this isn’t the right daycare for your daughter.”  I doubted that there was any daycare, anywhere, ever,  that would be suitable for her and her freakishly tidy, designer baby clothes-wearing little monster.

I discovered, in the worst possible way, what happens when a child who can walk vomits for the first time ever.  A friend of mine had just arrived for a visit as they passed through town.  They would arrive in the evening, have dinner with us, stay the night, and be out the door at first light.  How lovely.  They had barely gotten through the door and said “hello,” when they both became horribly ill with some sort of stomach virus.  They holed up in our bedroom for a couple of days while they recuperated.  I did my best to sanitize and keep the germs at bay but, honestly no matter what you do, every daycare is a petri dish.  The day after they left, when all of the toddlers were getting up from their naps, one by one, they started vomiting.  It seemed that their instinct was to try to run away from the vomit.  I had four toddlers running in different directions, vomiting all over the living room, as I chased them around with buckets and tried to calm them down.  I didn’t know who to call first, their parents or a priest!  Of course, my husband and I got it next.  In the aftermath, I thought we should just take a flamethrower to the place, move away, and start over.

“…..She seems to be doing alright.  She isn’t bleeding.  I’ve got her holding a damp cloth with an ice-cube wrapped in it on her mouth, but I can’t find the tooth anywhere.  She might have swallowed it.”  I hated that I had to say words like that to one of my daycare moms!   I had watched the tyke, not quite two years old, standing on a chair at the table, and already knew this could end badly.  She moved from one chair to the next and headed for the third before I could get to her, and she went down.  I heard the contact that her mouth made with the metal frame of the chair.  I looked at her, and there was no blood.  There was also no tooth.  She was crying frantically as I checked her over, did a scan of the room to see where the rest of the daycare kids were, went for the ice, and then went for the phone to call her mother.  Dread in my heart, as the phone rang, I had no idea what to say.  Her mom was extremely calm and understanding.  After their visit to the dentist, mysteries were solved.  The tooth hadn’t been knocked out, but rather shoved up into her gums.  OUCH!

“I finally won at bingo! I can’t believe I lost that many weeks in a row!” one mother exclaimed as she paid me in full for a months worth of daycare.  I couldn’t believe that she had been playing bingo for all of those weeks as she begged me over and over to give her a little bit more time, as she had fallen on a string of terrible luck, terrible luck that turned out to be a losing bingo streak?!  I was relieved, nevertheless, to be getting paid.  I thanked her, and then apologized for being such a bad luck charm.  I told her that I completely understood her decision to take her children elsewhere for daycare.  It took a minute for what I had said to sink in.  She understood, and we parted on good terms.  She told me to take care, and I said the same to her.  I so wanted to add, “Good luck!” but knew that would be immature, and also completely lost on her.

Oh, there were other incidences, such as the little boy who got into my makeup, and had, oddly, applied it almost perfectly.  There was a four-year old who liked to swipe his mom’s keys and then go start their car before she was even out the door.  We went through childhood diseases, pink eye and an odd one called “hand foot and mouth disease.”   There was only one parent who ever stiffed me.  All I’ll say about it is that I wish that kid had swallowed a hundred-dollar bill instead of that stupid quarter!

4 thoughts on “Keep the Change? NO THANK YOU!”