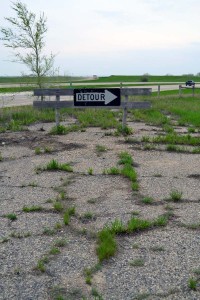 My young husband and I stood beside our broken down station wagon, each holding an infant up for passers-by to see.  We had four-month-old twins.  Along with our infant twins, we were traveling with our three little girls, ages five, three, and two, as well.  They have to see how desperately we need help.  Surely someone will take notice, take pity, and stop.

We had tried to get people to stop, but no one was going to stop for a young couple next to a broken down piece of crap car on the side of the road late at night.   I was panicking inside.  It’s getting colder.  We are so screwed.  Emily was asleep in her car seat, and our three and five-year old slept in the back of the station wagon.  I nursed Max when he began to fret.  I peeked back to see Ben’s legs kicking away as he gurgled contentedly.  How long until he starts fussing too?  What’s the worst thing that could happen?  It isn’t cold enough to freeze us.  The worst thing that can happen is we’ll have a car full of very uncomfortable, scared, and crying children.  Desperate times call for desperate measures.  That’s when it hit me, “We have to get the twins out where people can see them as they pass.  They’ll stop if they see that we have babies.”  Lyle sighed, “It’s worth a shot.”  It didn’t take long before a lady stopped on the opposite side of the interstate.  I was concentrating on getting the babies back into the car and out of the cold.  I could hear Lyle yelling a phone number at her.  “She’s going to the next pay phone and calling Dad.”  I felt a bit of relief, but I wouldn’t relax until we were in a warm car heading toward Bismarck.

It seemed as if Crystal Springs was some sort of cursed portal.  It never failed on our trips from Fargo to Bismarck, the weather always changed at Crystal Springs.  This was the second time our car broke down, just past Crystal Springs.  Our car trips were usually the best, though.  They all began with three of the two-cheesburger meals, super sized, from MacDonald’s, which we split amongst the five of us that were eating solid foods.  We would talk, laugh, belt out classic rock songs from the radio, and sing silly children’s songs,

Down by the bay,

where the watermelons grow,

back to my home

I dare not go.

For if I do

My mother would say,

“Have you ever seen a goose

DOWN BY THE BAY!

The song went on and on as long as our imaginations could keep finding rhymes.  We all took turns, and laughed every time someone presented their clever rhyme at the end.  “Have you ever seen a turtle, wearing a girdle… DOWN BY THE BAY!”

The flood of relief was overwhelming, as Lyle’s dad pulled up.  We rode to Bismarck in Papa’s car, and then tucked our sleeping cherubs into bed at he and Nana’s house.  The “Chevy-Chase-mobile” (dubbed by Lyle), would wait until the morrow.  At the moment, all were out of the cold, tucked in, and sleeping.  As I settled in to the warmth and comfort of the guest-room bed, I thought about the woman who stopped and went to the trouble of stopping at the next available phone to call for rescue, and I whispered into the night, “Thank you.”